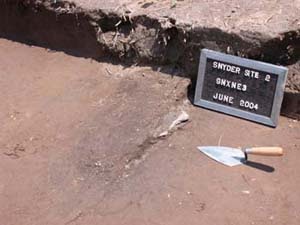 Northcentral Chapter 8 is the Lycoming County chapter of The Society for Pennsylvania Archaeology, Inc., which was organized in 1929 to:
• Promote the study of the prehistoric and historic archaeological resources of Pennsylvania and neighboring states;
• Encourage scientific research and discourage exploration which is unscientific or irresponsible in intent or practice;
• Promote the conservation of archaeological sites, artifacts, and information;
• Encourage the establishment and maintenance of sources of archaeological information such as museums, societies, and educational programs;
• Promote the dissemination of archaeological knowledge by means of publications and forums;
• Foster the exchange of information between the professional and the avocational archaeologists.
The chapter’s first meeting was held Aug. 12, 1955, at the James V. Brown Library in Williamsport.

The Mon-Yough Chapter #3 holds business meetings (open to all members) on the third Thursday of each month at 7 pm in Frich Hall, Room 203 at California University of Pennsylvania.  Contact Carl Maurer at PKMCJM@Verizon.net

Frances Dorrance Chapter #11 meets monthly at Duryea Municipal Building and on the last Tuesday of the month, March through November at the Conrail Site. Call for current information. Chapter Representative: Ted Baird (717) 842-2708,tedbaird@verizon.net

Forks of the Delaware Chapter #14 meets every first Thursday of every month at the Palmer Library Building, Easton, PA at 6 pm. Chapter 14 also has a new webpage and should be listed for events and contact for membership information. - www.spachapter14.com. Jay Rogers - Chapter Treasurer- rjrdgrs@aol.com

North Fork Chapter #29 meets the third Friday of each month at 7:00 pm at the Jefferson County History Center, 172-176 Main Street in Brookville, Pa. Parking is available at the rear of the building and people attending the meeting should use the rear ramp to enter. The Chapter offers many interesting activities to its members including monthly presentations about archaeology and related fields, archaeological investigations, and field trip opportunities. Membership information is on the North Fork Chapter web page and Chapter Representative Cheryl Burkett at  (814) 365-5563or cherlburkett@comcast.net

Venango Chapter #30 Venango Archaeology meets on the 2nd Friday of the month, except July & August at Christ UM Church, 1135 Buffalo Str., Frankklin, PA at 7:00 PM. Over the past three years , the chapter has excavated part of the Fort Machault, one of four French forts in PA. Meetings are open to the public. Chapter Representative: Karen Martin, kfmartin55@verizon.net

The name of this organization shall be the North Central Chapter No. 8 of the Society for Pennsylvania Archaeology.

The objectives of this Society are as follows:
(a) The study of the Archaeology of Pennsylvania, principally the North-Central area.
(b) The careful preservation and cataloguing of all archaeological sites and artifacts.
(c) The encouragement of the spreading of archaeological knowledge through educational programs.
(d) The insistence that all members make an honest effort to study the scientific approach to archaeological methods.
(e) To act in cooperation with the Pennsylvania Archaeological Society, local historical societies, etc., and render any aid possible.

The membership shall consist of five classes: Life, Individual, Student, Family, Business/Organization, and Honorary. Anyone may become a member upon application and payment of dues as stipulated by the general membership. The only other requirement shall be an honest interest in archaeology.

Life membership may be obtained upon application and payment of stipulated dues.

Individual membership is open to all who are 18 years and older and hold the objectives of the society.

Family membership may be obtained upon application and payment of stipulated dues.

Honorary membership shall, at all times, be limited to ten.

To hold office in the chapter, one must also be a member of the State Society.

Membership in the chapter shall terminate under either of the following conditions.
(a) Non-payment of dues for one year. Re-instatement shall become automatic upon payment of current dues.
(b) By expulsion for causes: Written charges signed by at least five members may be brought against any member for action detrimental to the welfare of the chapter. Such charges shall be included in the notice of the next meeting, at which time the charges will be considered. A three-fourth majority shall be required for expulsion. Re-instatement can be obtained in a like manner at any subsequent meeting, notice of this appeal having been included in the announcement of such meeting to all members.

The officers shall consist of a president, elected for a term of two years; two vice-presidents, also elected for a two year term, and a secretary-treasurer or a secretary and a treasurer, also elected for a two year term.  Directors shall be elected to terms of two years each. These officers shall constitute the executive board. The immediate past president will automatically become a director and shall continue to serve until succeeded by the next ex-president. New officers will take office at the January meeting.

The Duties of the offices:

The administration of the chapter shall be entrusted to the executive board, subject to instruction and ratification of their acts by the chapter at a regular meeting.

All officers shall serve from the close of the electoral meeting until their successors are installed.

Two months before the electoral meeting, but not less than one month, the president shall appoint a nominating committee to prepare a slate of nominations for the open offices for the ensuing year. The chairman of the nominating committee shall advise the secretary of these nominations, and the secretary will send the slate to all members not less than fifteen days before the electoral meeting. Additional nominations may be made from the floor. In case of competition for any office, voting at the meeting will be by secret ballot.

If a vacancy should occur on the executive board for any reason, the remaining members will have the authority to fill such vacancy until the next election.

Notice of all meetings shall be sent to all members one week in advance.

Special meetings may be called by the president, with the approval and consent of the executive board. All meetings will be governed by Robert's Rules of Order.

The fiscal year will run from January 1 to December 31. Dues will become delinquent March 1st.

Dues notice shall have been sent to members involved during the preceding three months. Members who are six months in arrears shall not be entitled to vote or hold office. Members who are one year in arrears shall, after formal notification, be removed from the roll. Officers who have not paid their dues on or before March 1st may not continue in that office.

General funds shall be invested in the name of the chapter and countersigned by the secretary-treasurer (Current), only one signature necessary for the issuance of checks. Transfer of account may be effected by the executive board, for the convenience of the newly elected officers.

The provisions of this constitution, as revised upon _February 6 of  2012 shall take effect immediately.