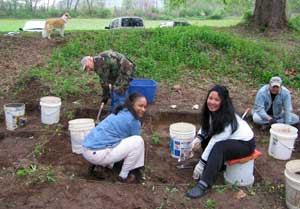 Northcentral Chapter 8 is the Lycoming County chapter of The Society for Pennsylvania Archaeology, Inc. During spring and summer, NCC8 hosts an archaeology dig for its members and the public, and during the winter we hold regular meetings and presentations by interesting speakers.

The local chapter provides archaeological excavation training sessions for new members and teaches them how to identify artifacts.

We maintain an online archaeology handbook for the amateur, as well as slideshows and videos of previous excavations. You’ll learn much about Pennsylvania prehistory within these pages, as well as how to observe Archaeology Month, which occurs in October in Pennsylvania.

Significant prehistoric sites identified by NCC8 and recorded with the Pennsylvania Historical Museum Commission include Bull Run, Canfield Island, the Ault Site and the Snyder Site.The Lycoming County Historical Society curates artifacts from these excavations where they are available for research purposes.

The chapter’s first meeting was held Aug. 12, 1955, at the James V. Brown Library in Williamsport. John Witthoft, Pennsylvania state anthropologist and one of the foremost scientists in the field of Indian history of Eastern United States, was the guest speaker and his topic was "The Identification of Artifacts." Interested persons were urged to bring stone or pottery material to the meeting that they wished to identify.

“The state society hopes that with the aid of the local chapter, sufficient research can be accomplished so that a more complete picture of early Stone Age peoples may be written. Members will be instruct­ed in the proper methods of ex­cavating and cataloging Indian sites so that results will have true research value. The first meeting will also feat­ure committee appointments and general plans for activities for adult members as well as students.” (Williamsport Sun, Aug. 6, 1955)

And so began more than a half century of archaeological inquiry that yielded ground-breaking cultural material discoveries. 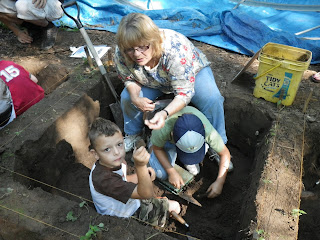 Soon, the organization gained the leadership of James Bressler who directed decades of archeological exploration, ongoing almost without interruption since 1976. Summers in the field and winters in the laboratory enabled Bressler and the chapter to define the Loyalsock Historic Complex -- a chronology of 7,000 years of cultural development, including the discovery of two Shenks Ferry fortified villages scarcely a kilometer apart, at the confluence of the Loyalsock Creek and the West Branch of the Susquehanna River.

Significant prehistoric sites identified by NCC8 and recorded with the Pennsylvania Historical Museum Commission include Bull Run, Canfield Island, the Ault Site and the Snyder Site. The Canfield Island site, 36LY37, was added to the National Register of Historic Places in 1982. Artifacts from these excavations are curated by the Lycoming County Historical Society where they are available for research purposes. Final reports detailing the artifact assemblages and their relevance to cultural identity and progression also are available through the Historical Society.