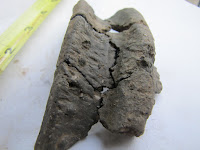 Their canoes carried them down from their native lands in central New York State and now plied up and down the river in a colonization of this part of Pennsylvania that would last for more than 400 years.

While they were here, they became mound builders, most likely borrowing the idea from the already declined Adena and Hopewell cultures, whose mounds and earthworks still remained in New York and Ohio. We know from the excavation of these huge earthen mounds locally at Muncy, Lock Haven and Lewisburg that they were used for burying the dead and possibly to mark these cleared fields as theirs. 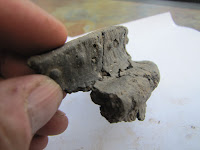 These same fields would prove to be a valuable commodity and eventually target them for conquest.

Archaeologists identified these people as the Clemsons Island culture, naming them after the island in the Susquehanna River where they were first excavated in the 1970s.

Archaeologists also know that they, along with another culture or subculture, the Owasco (also originating in central New York and “cousins,” if you will) occupied the entire Susquehanna River basin beginning in approximately 800 A.D. until 1250 A.D.

They did, fortunately for us, produce a form of tribal identification that makes it easy for us to recognize their areas of habitation. They made a very distinct form of pottery and marked it, in the case of the Clemsons Island people, with punctates (convex dots spaced evenly around and under the rim of the vessel).

The Owasco, never used this design and there is mention of the this fact and of their culture in this article for one reason -- to make the case that even though they lived in close proximity to the Clemsons Island people, they never developed, to the best of our knowledge, a hybrid-style pottery, each culture keeping its own identity. 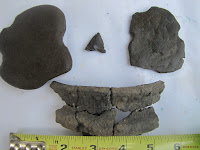 This most likely occurred not only in ceramics but in many aspects of tribal life as well.

So pottery styles in prehistory were fairly consistent and for hundreds of years remained the same with only some deviations at times and at that mostly small changes in decoration but not in structure.

And this is where we turn our attention to the pottery featured in this article.

Excavated in the summer of 2011 by members of the Northc Central Chapter 8 (NCC8) of the Society for Pennsylvania Archaeology working at the Ault Site, this little piece of the past has proven to be a real curious find. The site, next to Paul Glunks Nursery and near Canfield Island in Loyalsock Township,  is by the Bull Run estuary just a short distance from the West Branch of the Susquehanna River.

As we worked down through the layers of the past, through the historic period (site of a lumber mill) and the plow zone of the last 200 years, we uncovered evidence of Native American occupation, in particular, Clemsons Island / Owasco artifacts.

Working in EU2 (one of six excavation units) at a depth of 19 inches, we had uncovered a fire ring. We already had found stone net sinkers, fire cracked rock, chert (flint) debitage and assorted pieces of pottery. On the perimeter of the ring, we began to brush away dirt revealing something that was not typical of the pottery found thus far. The section of a rim sherd was broken but the close proximity of crushed pottery pieces gave us a picture of what it may look like.

After carefully cleaning and assembling the sherds, we realized that we had found something unique. It was undoubtedly Clemsons Island because of the punctates, but this vessel had a distinct protruding lip under the row of convex dots.

In researching the piece, there were no matches found.

Keep in mind, however, that it would be an enormous task to access everything found in excavations that may go back nearly 100 years in Lycoming County, let alone the entire territory that these people inhabited.

In November, members of the society attended an archaeological workshop at the State Museum in Harrisburg. Part of the schedule included identification of artifacts brought to the museum by members of SPA chapters around the state.

Sitting down with two state museum artifact experts, Steve Warfel, archaeological consultant, and Doug McLearen, chief of Archaeology and Protection, we took the rim out of a cotton-lined plastic box for them to inspect. They didn’t hesitate. After looking at it for a few minutes they pronounced it a unique find and indicated they had nothing like it in the museum.

Jim Herbstritt, historic preservation specialist for the museum, was called in and added that the lip appeared to go the entire way around the pot and was not a handle (in itself would have been an innovation for the culture). He theorized that the lip was for hanging the pot and dated it at around 1050 A.D. He also indicated that it may be a “marriage of styles.” In other words, this may be the combination of two distinct cultures.

But apparently hanging pottery simply wasn’t done here in the Susquehanna Valley at that time. There may have been some design differences in the world of prehistory pottery but for the most part, structural innovations were not encouraged or accepted for whatever reasons. Perhaps strict adherence to tribal tradition guaranteed that change came slowly.

But they could have definitely used a more innovative way of cooking. If we have it right, they propped their much larger conical bottom pots upright and lit the fire around them and/or used hot rocks dropped into the pot to cook. Can you imagine the grit produced in the stew putting hot rocks in the mixture? Their teeth undoubtedly suffered damage.

We do know, however, that during thousands of years of trade and interaction with tribes from other areas, change did come. Examples include agriculture and the coming of the bow and arrow, and as pointed out earlier, mound building.

So it is curious that a culture like the Clemsons Island people, with a record of inclusion of new ideas, would not develop better ways to cook, like hanging the pot over the fire.

Or maybe they did.

Before leaving our meeting, Herbstritt urged us to show it to Jim Bressler, who some consider the patriarch of North Central Pennsylvania archaeology. In January, we had the opportunity to do just that. Although not in the best of health and in his mid-90s, Bressler is sharp as a tack and fascinated us with his knowledge of local excavations.

Following the lead of the State Museum experts, Bressler proclaimed it “one of a kind” and doubted any more of this type of pottery would be found.

But if that would be true, it would be unfortunate.

We could easily envision this pottery being made by a captive of a faraway tribe and making it in such a way to blend styles, keeping the requirements for Clemsons Island identity and maybe adding something of his or her past life. Or maybe this was done to fill a particular need. Perhaps there was a need to hang the pot for whatever reason and a very creative person fashioned this oddity out of clay to meet that need. And maybe, just maybe, this was a common type of pottery and there have not been enough excavations done to establish that fact.

One thing is for certain, we will be back in the spring to search for answers.

If you’re wondering what became of the Clemsons Island people, we know that in approximately 1250 A.D. another culture, the Shenks Ferry people pushed them out of the Susquehanna River system. They retreated to their native lands in New York and during the next several hundred years became what we now call the Iroquois.

Anyone interested in becoming a member of NCC8 or have anything to contribute to our excavations please call Tank Baird at 570-244-6153.

NCC8 meets at the Lycoming County Historical Society, when not actively working a site. More information about the group and how to become a member is available online at http://www.PennArchaeology.com.